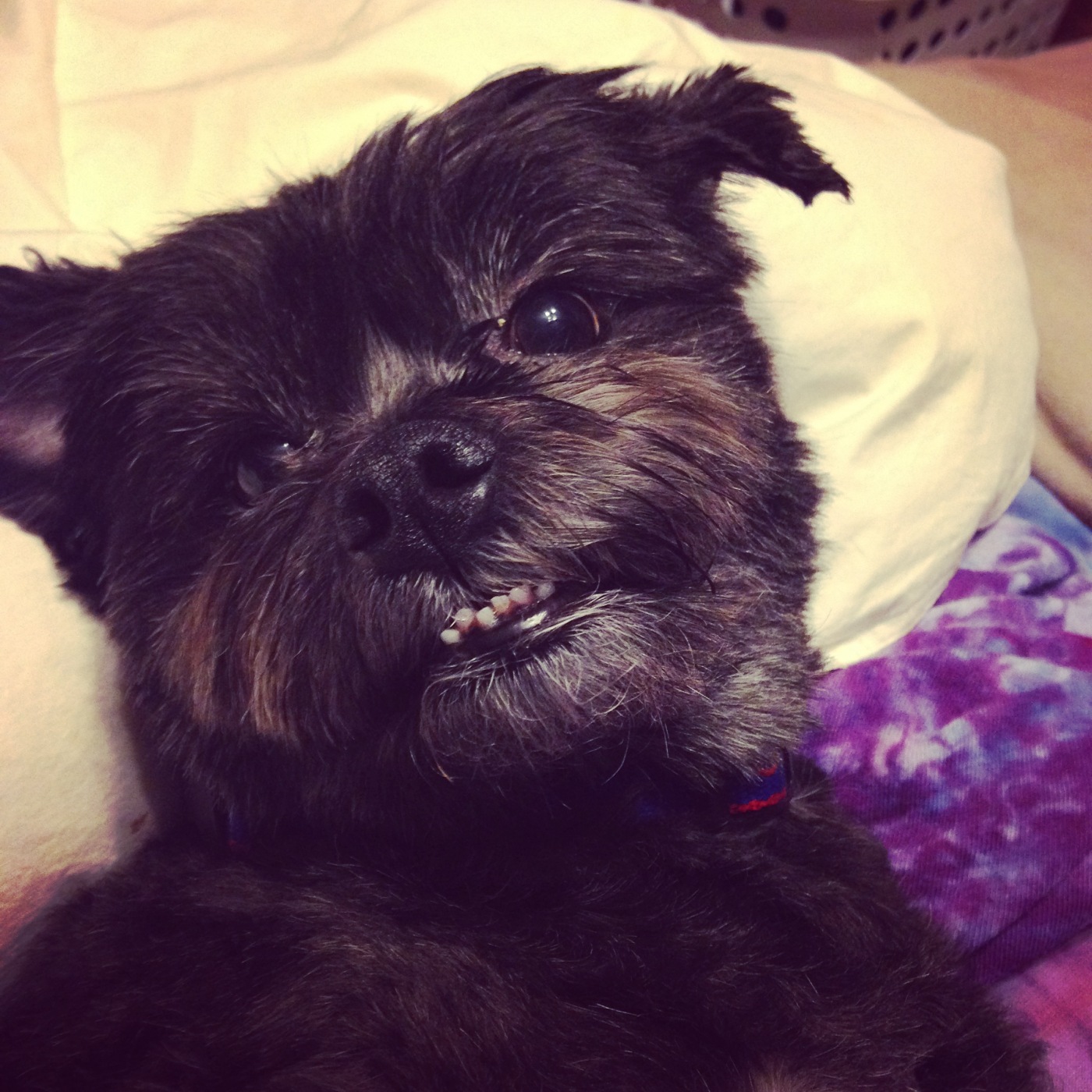 I’m taking an online class from Pema Chodron, one of my beloved teachers. There’s a ton of great information to absorb (way more than I can probably absorb in one 6-week class) but the question she recently asked has stuck with me:

I’m sitting here next to my dog Bernice, who has snuggled up to me on the couch. We adopted her from the Western Pennsylvania Human Society a little over two years ago, the week before Bone and I taught our first weekend intensive.

Bernice had been returned to the shelter after being adopted out, and it seemed that she had “gotten worse” in her year with her “forever home” – the family had locked her in a room most of the day, and thus she was labeled an escape artist. She was also supposedly not house trained, aggressive toward other dogs, didn’t respond to play or toys, and a whole list of other things.

Some of those things were true. Bernice desperately needed attention, and would bully our Yorkshire Terrier Porky in a desperate attempt to keep all the available snuggles for herself. She would dart out of our apartment door, and we would have to entice her back into the apartment, away from traffic and other dangers. She was desperately afraid of thunderstorms, and would hide under the bed at the smallest rumble in the sky. She made some bathroom mistakes in the house, liked to eat papers if they were easily accessible, and did her best Exorcist head-spinning impression any time she met up with another dog on a walk. She never played with toys or seemed interested in fetch.

Bernice is the same, and yet different now. She doesn’t bully Porky as much, thank the gods – Porky is a sweet and fierce little soul, and adjusting to the New Kid was very hard on her.

Bernice no longer makes desperate attempts out the door for freedom. I like to believe she feels safer with us than she does out on the sidewalk, alone. However, if we take her off-leash out in wide open spaces (for example, at my husband’s parents’ large rural property in Ohio) we have a hard time getting her to let go of the fun and the running and the freedom. It requires coaxing.

Bernice is still afraid of thunderstorms, but she now prefers to be cuddled up in a warm and loving lap to ride out the storm.

Bernice has been an impeccably house trained pup for a very long time. If there is ever a mistake made, it is human error that is to blame. She no longer eats papers. She is still aggressive toward other dogs, but it has lessened, and is nonexistent when she is off-leash. She has her favorite toys, and delights in playing with them.

It is easier for me to see it in another living being.

I think back to three months ago: my mother had just died on the 21st. I was helping my father, brother, and aunt go through my mother’s things. I was full to the brim with grief and resolution, crying and working through the tears. I was terrified that my husband was going to die unexpectedly. I was relieved that my mother was no longer suffering. I was trying to ride the waves of grief and fear and not drown. We had just moved into our current townhouse at the beginning of the month, and that was contributing to my intense feeling of general overwhelm.

I think back to three years ago: it is difficult to recall what was going on. June of 2012…oh yes, at that time my husband (then fiance) I were moving in together, so he would have just moved into what had been my apartment on June 1 of that year. We were still unpacking, still getting used to truly sharing a space. I remember feeling very happy at that time, very confident. I also remember being stressed out about wedding planning. I had long, dark blond hair.

I think back to three minutes ago: I was trying to remember things that were happening three years ago. I was wondering if this post was getting too long, if it was making the point that I set out to make, and then realized that I liked where it went, how it meandered down an unintended road.

All images by Amoret

2 thoughts on “Everything Changing”